My dog, a golden retriever adopted from Battersea Dog’s Home, has been with us for almost ten years. 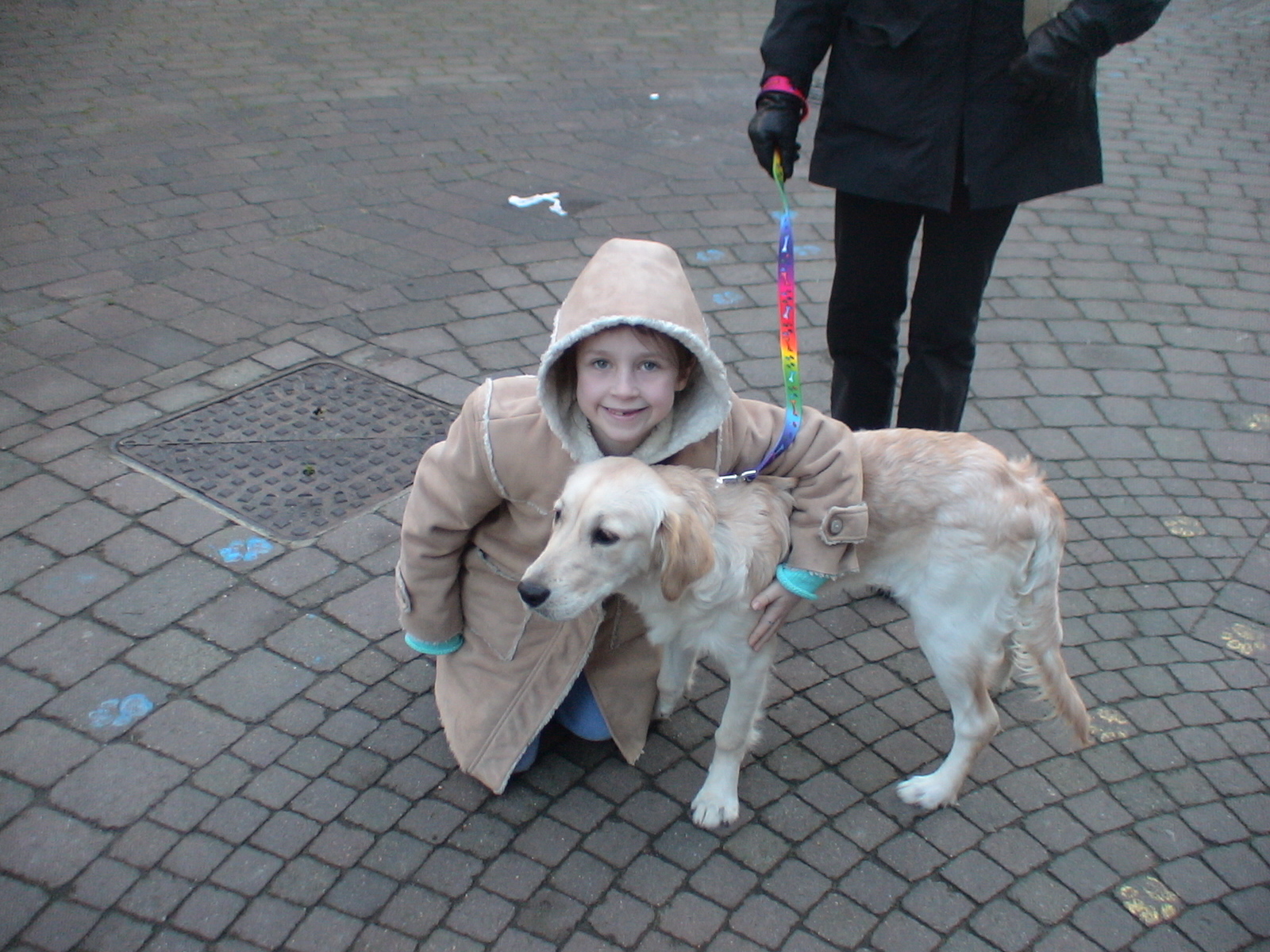 Bobby being picked up at Battersea

Bobby isn’t terribly well trained, especially when it comes to food.  Several times he has eaten ice creams out of children’s hands (they’re at his level!) and we are always chasing him to prevent him from eating someone’s picnic, especially when the weather is good.

Golden retrievers are famous for how fast they eat.

The difference between a pet like Bobby and a working border collie like Reggae in The Secret Dog is huge.  It takes lots of time and hard work to train a working dog so that he can work with sheep like this.

And having never trained a sheepdog, it was a challenge to me to write this convincingly.

I started off with reading.  “The Natural Way” by Julie Hill and “Sheepdog Training and Trials” by Nij Vyas were my first books. But mostly they made me aware of how little I knew, so I decided to visit both trainers.

Julie Hill, who lives about thirty miles from Edinburgh, was the first person I visited.  My friend in Skye had purchased a trained dog from Julie and she had taught him how to work it.  I spent an afternoon with Julie, watching her work her dogs with sheep, and plying her with questions.

Julie’s technique is to learn the dog’s language, to associate your words with his movements.  If there is a sign the dog will go left, you say left. She taught me you create movement by moving into the dog’s space.  If you want the dog to go back, you step towards him.

Nij Vyas, who I visited next, approaches dog training from a different point of view. Having been a manager in a previous life, he regarded the dog as an employee.  Nij points out there are two kinds of manager, ones that work with the employees, and those that use the stick.  After interviewing Nij and watching him work with his dogs, I was invited to work with one dog myself, in a pen.  Even with Nij there giving me instructions, it wasn’t easy!  It took some time before I was able to get the (already well trained!) dog to work opposite me.

The problem with all this personal tuition was that it wouldn’t be available to Josh, my character. Josh could only use freely available resources to learn how to train his dog.

So I began to explore dog training videos on YouTube.  These led me to chat rooms – forums – for people who were involved in training sheep dogs.  The enthusiasts on these forums were enormously helpful, responding to my (often very basic) questions, patiently and quickly.  I realized that these forums could be a resource to Josh in the book in a similar way.

From Nij and Julie, I had learned that dogs have very different temperaments, especially when it came to working with sheep.  One of Nij’s dogs had charged into the pen with the sheep, showing them who was boss immediately.  Another came in quietly, let the sheep get used to his presence, and only then started to work.

The fact that he was going to school, helping on the farm, and attempting to keep his dog a secret, meant that Josh had very limited time to train his dog.  I decided Reggae had to be a “natural dog,” one attuned to sheep, and watchful and intelligent by nature.  This meant she could pick up what she had to learn swiftly, and that Josh had to be on his mettle to teach her properly.

After all this research, I started work on the dog training chapters in my book.  I was enormously gratified that when I had Julie Hill check the chapters and she only had to make a few minor corrections.

Here’s a video of the whole process, condensed into four minutes.

And here’s a cute young pup with the moves of a trained sheepdog, but a lot to learn!